FemCap™ is an FDA-approved, non-hormonal contraceptive device that fits directly over the cervix. Shaped like a sailor’s hat, FemCap™ is designed to remain in place during sexual activity to prevent sperm from entering the cervix.

This is a short video which describes FemCap™ design and use.

(Please note: the description video includes an audio commentary that may not be appropriate for public locations.)

To learn more about FemCap™ you can:

How Do I Use FemCap™?

FemCap™ is inserted like a tampon and placed  over the  cervix prior to sexual activity.  The FemCap™ can be applied 15 minutes – 40 hours prior to intercourse. It must remain inserted for at least 6 hours after intercourse (so that sperm dies and can not penetrate cervix during removal); however, the FemCap™ must be removed  24 hours after intercourse. Detailed usage instructions are included with every purchase.
FemCap™ is easy to use. The average user can learn how to insert and remove FemCap™ in a few minutes, and master it’s use in a few days. With practice, insertion can be as easy as putting in a tampon.

How Long Can FemCap™ Stay In?
FemCap™ can be used as a continuous barrier; however, it should be  removed at least every 48 hours for cleaning even if no intercourse has taken place.  It should then be cleaned and dried thoroughly before reinserting  for another 48 hours.
After intercourse, the FemCap™ must stay in place for at least 6 hours.. The 6 hour period allows for the sperm that was collected by the FemCap™ to die before removal.
Prior to reinsertion, simply clean and thoroughly dry FemCap™.
How Effective is the FemCap™?

For more information on the effectiveness of FemCap, please visit the following resources:

What are the Side Effects of FemCap™?

FemCap™ is a hormone-free.  FDA-approved clinical trials indicate that there are no known local or systemic side effects from the use of FemCap™.

Does FemCap™ Require a Custom Fitting?

Although, FemCap™ doesn’t require custom fitting. U.S. residents must obtain a prescription. Your clinician will determine which size you need based on your obstetrical history.

The 30 mm (Emerald); which  was designed for women who have given birth vaginally.

The 26 mm (Sapphire) was designed for women who have been pregnant; but did not deliver vaginally (delivered by C-section or experienced a miscarriage or abortion).

The 22 mm (Pearl) was designed for women who have never been pregnant, (this includes no miscarriages or abortions.)

How can the FemCap Determine the Exact Day of Ovulation?
What is the History of the FemCap™?

The first generation of the FemCap™ (with no removal strap) was clinically tested in 1988; the preliminary clinical trial was published in 1991 and co-authored by James Trussell, Ph.D of Princeton University.

The pivotal clinical trials were also conducted with this earlier version of FemCap™ in ten universities in United States from 1995-1997.

Despite the fact that this earlier version of FemCap™ was proven to be safe and effective in the pivotal clinical trials, we have learned that this first-generation device had two drawbacks.

First, poor effectiveness rate of specifically the large 30 mm FemCap™ that is designed for women who delivered vaginally due to frequent dislodgement, and Second difficulty with the removal of FemCap™. 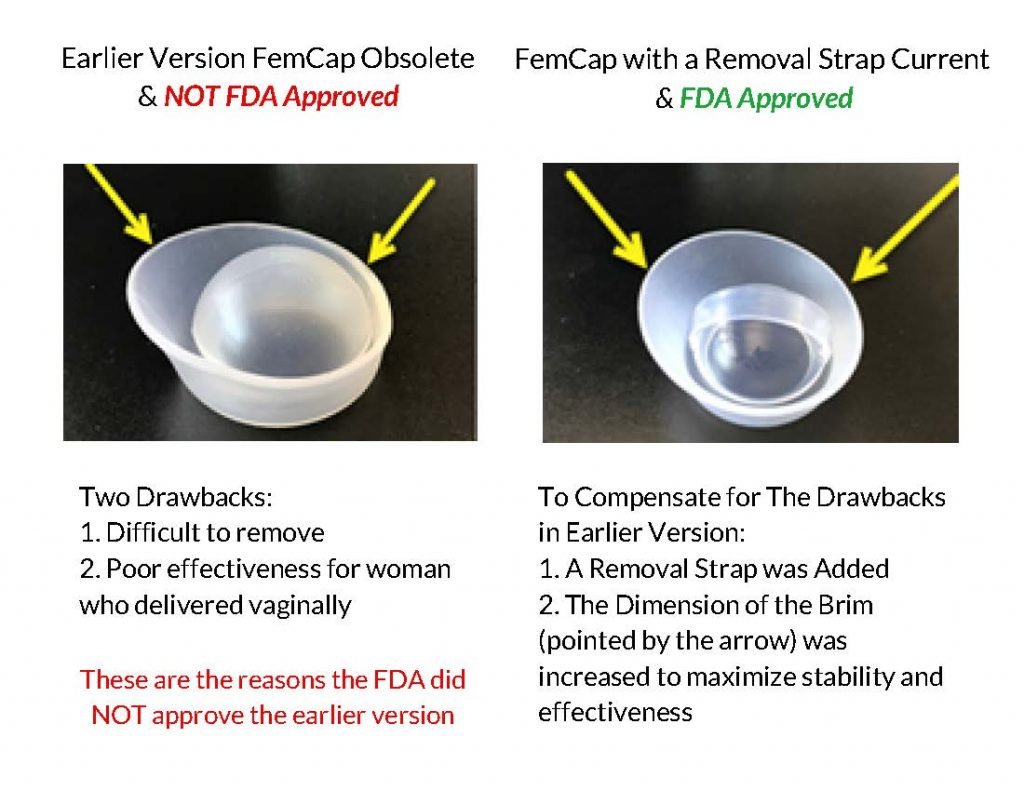 The second generation FemCap™ with the removal strap is the only device approved by the FDA for marketing.

To further enhance the effectiveness of FemCap™ the FDA:

The Second generation FemCap™ with the removal strap is the only device approved in European countries in July 1999 and by the FDA in March 2003 for marketing. FemCap™ has not withdrawn from any market for any reason

Does the FemCap™ Interfere with Sensation?

FemCap™ does not interrupt spontaneity or reduce sexual pleasure for either partner. It is inserted before any sexual arousal. Due to FemCap™’s unique design and soft composition, the woman cannot feel it at all, and the male partner rarely even notices that it is there.

Will the FemCap™ Interfere with my Natural Lubrication?
NO, the lubricating fluid comes from Bartholin Gland which is in the labia not the cervix so the FemCap will not interfere with any natural lubrication.
Does FemCap™ Get Dislodged During Intercourse?

No. The FemCap™ is specifically designed with a longer brim that prevents it from being dislodged during intercourse. In order to accommodate different sexual positions, FemCap™ is designed to rotate. As long  as the FemCap™ is properly  inserted,  the FemCap™ ensures that the cervix remains covered throughout the sexual act.

Can FemCap™ Be Used During Menstruation?

FemCap™ CANNOT be used during menstruation,

The it fits over the cervix and would impede the natural flow of menstrual fluid.

We recommend that you use another form of contraception (like condoms) during your menstrual cycle.

How does the FemCap™ Compare to the Diaphragm?

FemCap™ is different than the diaphragm in many ways.

For more information on the differences between FemCap™ and the diaphragm, see the chart below: 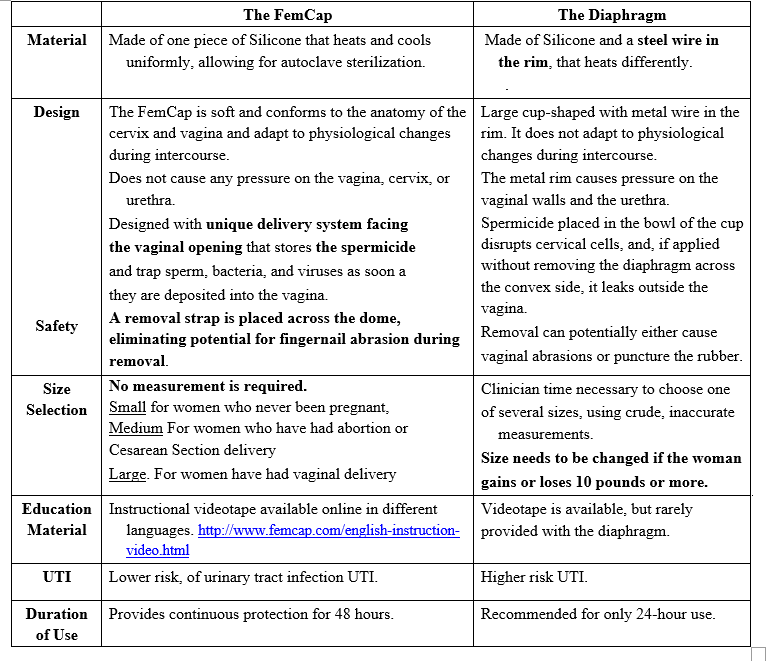 Once you place an order through FemCap™.com, please allow for your order to be packaged and shipped.

Once your order has been packaged and shipped, you will receive an order confirmation containing your tracking number and carrier via email.

After you have your tracking number, you can follow the progress of your order; in addition, to location and exact time of arrival.

Note: Tracking numbers for international orders… (must include letters with numbers when tracking)

If you have any questions or concerns regarding your FemCap™ orders

Please contact American Mail Order Pharmacy which handles all of our FemCap™ orders:

They can also be emailed at: Amoprx@comcast.net.